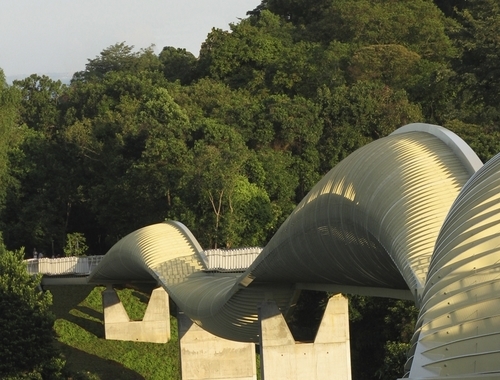 The Southern Ridges comprise a nine-kilometre chain of green and open spaces spanning the hills of Mount Faber Park, Telok Blangah Hill Park and Kent Ridge Park before ending at West Coast Park. The completion of two pedestrian bridges by URA – the Henderson Waves and Alexandra Arch – bring to reality the earlier plans of URA to seamlessly connect the hill parks and transform the Southern Ridges into a recreationaland leisure playground amidst nature. Areas within the Southern Ridges that were previously not accessible are now open to the public as a result of these linkages.

The two pedestrian bridges and the elevated walkway within the Southern Ridges have garnered several architecture and engineering awards both locally and internationally, including the Design of the Year at the President’s Design Award Singapore 2009 for Henderson Waves and The International Architecture Awards for the Global Design given by the Chicago Athenaeum: Museum of Architecture and Design for the Alexandra Arch and Forest Walk.

Standing 36 m above Henderson Road, Henderson Waves is Singapore’s highest pedestrian bridge, with an interesting sculptural wave-form made up of seven undulating curved “ribs”. These curved “ribs” form alcoves, which alternately rise over and under the bridge deck, providing visitors with shelter and seats within.

With its curved deck and tilted arch, Alexandra Arch spans Alexandra Road like an opened leaf. On one end, it links to Forest Walk that comprises a step-free elevated walkway and trails through the secondary forest of Telok Blangah Hill. The elevated walkway rises to between three to 18 m above ground in the hilly terrain, and expands into viewing decks at selected locations to enable visitors to take in the scenic natural surroundings. On the other end of the bridge at Hyderabad Road is a Floral Walk that links to HortPark.