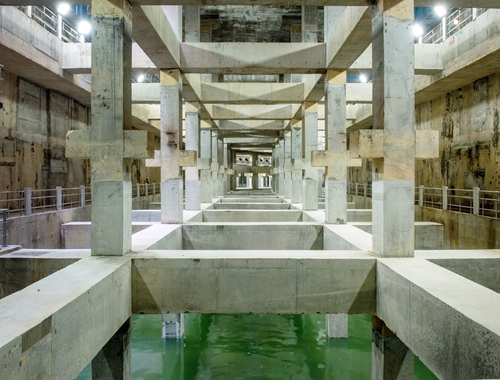 The Stamford Diversion Canal (SDC) and Stamford Detention Tank (SDT) are complex infrastructure projects that provide important, long-term measures to alleviate floods in the Orchard Road belt. The 2km SDC running underneath Tanglin Road to Grange Road diverts stormwater from the upstream of Stamford Catchment (such as Holland Road and Napier Road areas) into the Singapore River through two underground tunnels of 4.5m diameter and drains (6m to 14m wide box culverts), eventually leading to Marina Reservoir. This relieves Stamford Canal of a portion of stormwater.

The SDT sits underneath the Singapore Botanic Garden’s Tyersall Learning Forest’s Coach Park and the National Orchid Nursery. Although the SDT is as large as a football field, its facility building on the surface only takes up a fifth of this area, freeing up space for the coach park and nursery. It is designed to temporarily store stormwater from the drains in Holland Road during heavy rain. Excess stormwater flows from the drains into a weir chamber where a pair of inlet pipes will then channel the water into the SDT by gravity. After the water level in the Holland Road drains subside, the water stored in SDT will then be pumped back into these drains that lead to SDC. The SDT can hold up to 38,000m3 or 15 Olympic-sized swimming pools of stormwater. By detaining, delaying and diverting stormwater runoff, the SDT and SDC offer long-term flood protection for Orchard Road.

SDC is one of the shallowest large diameter tunnels in Singapore, with some areas a mere 4 metres underground. Construction of the SDC was challenging as the conventional method of using cut and cover for construction along Grange Road was not feasible for the densely built-up area. A tunnel-boring machine was used instead to build the two underground tunnels measuring 4.5 metres in diameter.