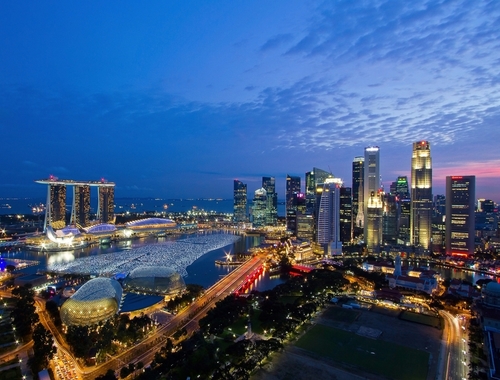 The planning vision for Marina Bay is to develop the area to provide prime office space for global business and financial institutions, complemented by a full range of residential, shopping, dining, cultural and entertainment activities. The Government has put in place key infrastructure and facilities to make Marina Bay accessible and attractive to the public and investors. This includes developing a waterfront promenade around the bay, a pedestrian cum vehicular bridge that links to Marina Centre, as well as the extension of the Common Services Tunnel and the road and sewer network to bring utilities to serve new developments. Given the prime location, it is important that the infrastructure works are well-designed and relate well to the context, planning and urban design intentions for the area. 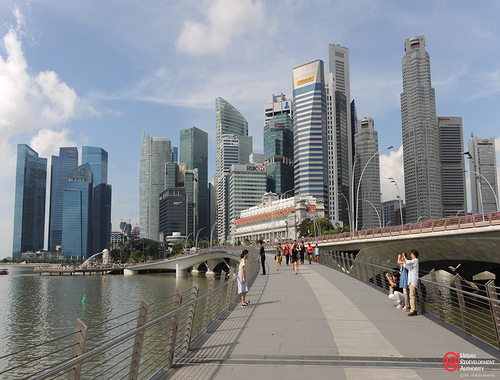 To minimise disruption to businesses and activities in the area, as well as vehicular and pedestrian traffic along the Esplanade Bridge, construction of the Jubilee Bridge was carried out from the river. This presented the challenge of working within a tight space constraint without firm ground underfoot. Pile caps were placed underneath the river bed to allow a wider channel flow and to achieve a better slender column appearance, even though it added difficulty to the construction process.

The bridge comprises 61 pieces of large concrete segments, each weighing an average of 40 tonnes or 30 mid-sized sedan cars, and constructed with extreme engineering precision under the strictest control to achieve an accurate fit during installation. The complexity was further increased by the three dimensional curvilinear shape of the bridge, whereby each segment had to be installed within a specific tolerance of only 2.5 cm or half the length of a toothpick. The entire weight of the bridge – all 3,000 tonnes, rests mainly on the two-column support, of which its design was a challenge in itself, being the key structural element that holds the bridge, while still maintaining a simple and elegant design. 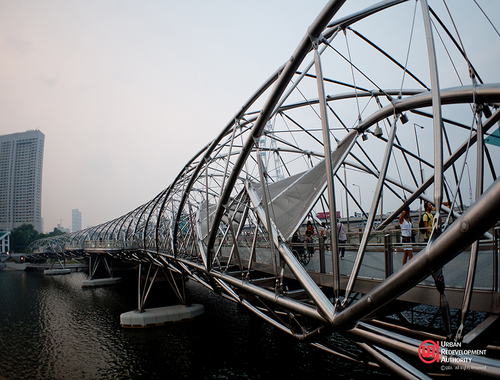 The 280-metre pedestrian bridge – the longest in Singapore – incorporates a unique ‘double-helix’ structure, a world’s first in architectural and engineering bridge design. It comprises two opposite spiralling steel members held together by a series of connecting struts to form a tubular structure. The bridge uses a special duplex stainless steel, usually used only in the chemical industry, for its ability to withstand corrosion and high tensile strength. The construction of the curved double helix bridge was an engineering feat that required great precision in the fabrication and assembly process. 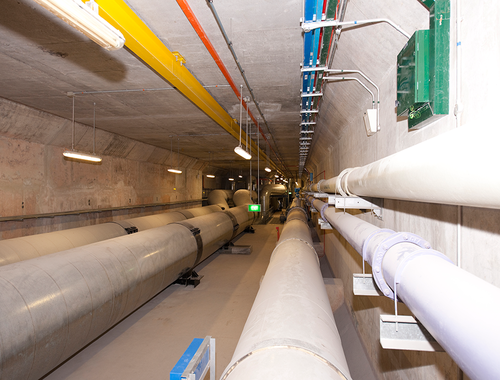 The first of its kind in Southeast Asia, the Common Services Tunnel (CST) is a state-of-the-art infrastructure consisting of a network of underground tunnels. The CST houses all cabling and piping for electricity, water, power and telecommunications for distribution to all developments in Marina Bay.

URA took the lead in planning, designing and co-ordinating the construction of the CST network which comprises some 20 km of linked tunnels. The geology of Marina Bay, being reclaimed land underlain with a thick layer of soft marine clay, posed significant challenges to excavation works. The discovery of buried structures such as seawall, lighters’ wharf, piers structure and an extensive rock mole added more complexity to the project. Measuring 30 m deep, 60 m wide and 1.5 km long, the mole consisted of rocks as heavy as 20 tonnes and was obstructing the building of the CST. A flooded cofferdam was used to remove the mole in the shortest possible time and to avoid having to remove the earth covering the mole under the conventional dry excavation method.

The CST was also built at a time when other major infrastructural works, such as the Mass Rapid Transit (MRT) tunnels, sewers and underground pedestrian network were ongoing. At its deepest point, the CST had to under-cross the train tunnels at 30 m deep (equivalent to a 10-storey building underground), which posed challenges to temporary retaining works.

Construction was carried out in phases to integrate with the overall planning and development of Marina Bay. With utility pipes and cables housed within a concrete tunnel, reliability of services is enhanced as pipes and cables can be regularly inspected and maintained. There is also greater protection against accidental damages such as excavation work. The tunnel allows for new services to be installed in response to future demands. It is big enough for people to walk through, and eliminates disruption caused by digging up carriageways and service verges. It also maximises the use of underground space, saving space at ground level – some 1.6 hectares, equivalent to two soccer fields, in Marina Bay alone.