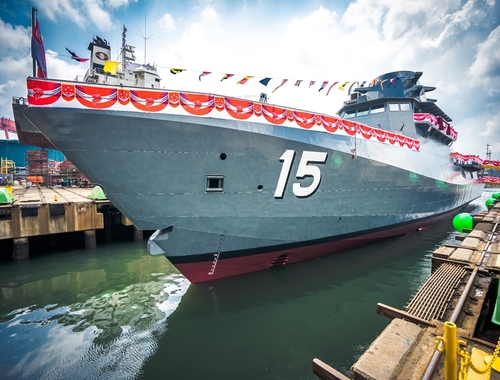 In January 2013, the Ministry of Defence signed a contract for the construction of eight littoral mission vessels (LMV) for the Republic of Singapore Navy (RSN). The Defence Science and Technology Agency (DSTA) is the overall programme manager and systems integrator for this “Uniquely Singapore” warship, which is designed locally to meet our country’s specific requirements.

The new LMVs are highly capable warships designed and armed with advanced combat capabilities and technologies to further strengthen the RSN’s ability in the seaward defence of Singapore and protecting our sea lines of communication.

The first LMV, Independence, was launched on 3 Jul 2015. The eight new LMVs will replace the RSN’s fearless-class patrol vessels, which have been in service for 20 years.

SIMULATION TO ENABLE A SMARTER SHIP

The LMVs are designed with an Integrated Command Centre where the ships’ Bridge, Combat Information Centre and Machinery Control Room are co-located. The Integrated Command Centre integrates and synergises the management of navigation, engineering, and combat functions to achieve greater operational effectiveness and efficiency, especially during maritime security operations.

DSTA validated the concept of the Integrated Command Centre. The DSTA Analytical Lab was set up to support the study of new operating concepts and workflow performance. In developing the lab, DSTA harnessed modelling and simulation of the new vessel, providing the RSN operators a realistic and immersive experience to try out a new way of operating the ship. A cognitive task analysis study was also conducted at the lab to reduce the crew size in the Integrated Command Centre. The study helped the RSN to reduce the crew size of the LMV to 23 men, compared to around 30 for the previous generation patrol vessels.

Equipped with a three-dimensional surveillance radar system and two high resolution navigation radars, the LMVs will be able to detect surface targets better in a congested environment. For target identification, the LMVs are equipped with a 360-degree panoramic day and night camera suite, comprising an all-round surveillance system and four electro-optics directors, and a 360-degree bridge that offers an unobstructed view to achieve all-round visual awareness of its immediate surroundings. This is essential in our congested waters where there is a high concentration of shipping and fishing activities amidst island groups.